Slovenia is a real treasury of natural wonders and Bovec is one of its crown jewels. The emerald river Soča, a wild world of alpine peaks, high waterfalls, canyons, natural pools and quiet valleys, jealously guards the secret of the old world. Tandem paragliding offers a bird's eye view reveals hidden gems that are waiting for us. Fly in the company of eagles and discover all that was previously unknown to you, with us.

"Bovec would not be Bovec without its adrenaline junkies"

Tandem paragliding is our most popular and the oldest offer. You have to be at home somewhere, and we prefer to be in the air. Years of flying and hundreds of satisfied guests are behind us, whom we hope we have helped to move a step or two away from the stresses and limits of  modern man.

Our top take-off point is Mangart, both because of the altitude and because of the dramatic view that is offered. The gentler take-off points are at Stol and Kuk, where we can already taste the softer atmosphere of the Mediterranean in the Alpine world. In winter and far into spring, our focus is the snowy Kanin, where we set sail from the ski resort and take the air route to Bovec. 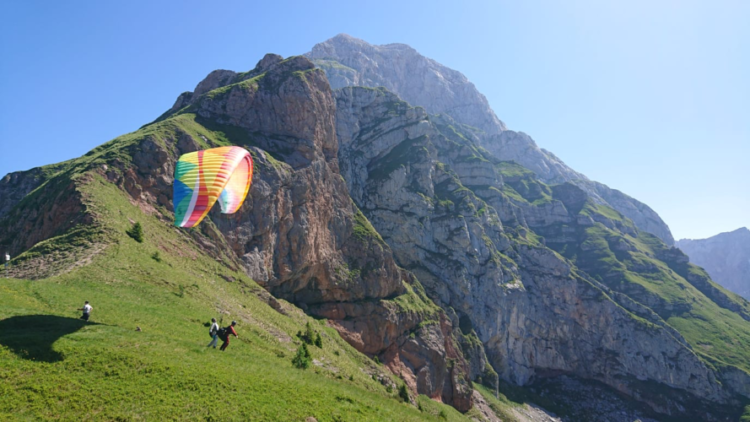 From Bovec to Mangart Saddle we take the highest road in Slovenia, which was built in 1938 under the Italian government. The trail, which constantly rewards us with a beautiful view of the picturesque Julian Alps, leads us to the take-off point, which is located at an altitude of 1960 meters above sea level. The trip begins in the embrace of grassy plains, which turn into colourful carpets of
alpine flowers in summer. The flight is full of amazing panoramic views, as the mighty Mangart, the third highest mountain in Slovenia, is located in the company of the high peaks of the Western Julian Alps. The view extends all the way to Veliki Klek (Grossglockner), the Dolomites, the lakes of Mangart and the beautiful Adriatic Sea. Your flight ends safely in the village of Log pod Mangartom, where there is a landing at 630 meters above sea IeveI.

In summer or winter, the high altitude ski resort enriches everyone who flies, with beautiful views.

Kanin is the highest ski resort in Slovenia, known for its large amounts of natural snow and exceptional panoramic views of the surrounding Alps. The airfield is located at an altitude of 1717 meters above sea level and is accessible by gondola lift or off-road vehicle. Even before the descent, we enjoy the view of the emerald River Soča and Slovenia’s highest mountain, Triglav. In winter, the take-off is arranged along the ski slope on snow, and in summer on gravel. During the descent itself, the bird’s eye view allows us to search for kayakers and rafters cruising along the Soča, and our view reaches all the way to the Adriatic Sea. Throughout the flight, we are accompanied by the villages of the Bovec valley, which are scattered under our feet. A safe landing is arranged on the Breg meadow
in Bovec. 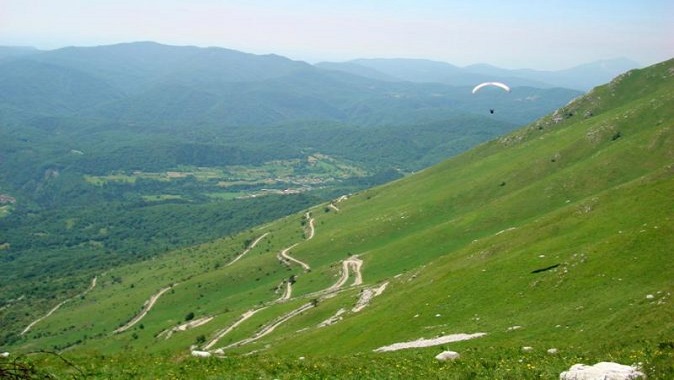 A paradise for paragliders will enrich your flight with a view of the meandering rivers Soča and Nadiža.

At an altitude of 1405 meters above sea level, there is an airstrip on Stol, which is a paradise for paragliders. From Bovec, we first head towards the Učje valley along an asphalt road, and later the path leads us along the macadam road to Planina Božca. Surrounded by colourful mountain flowers and a view of Krn, we descend from the world-famous airfield, where a paragliding competition is organized every year. During the flight, we are accompanied by the Rivers Soča and Nadiža, which flow below us and open up an exceptional view of the valley. The landing is arranged in Kobarid, at an altitude of 220 meters above sea level, or in the case of a longer flight you can fly to Bovec and land safely at an altitude of 460 meters above sea IeveI.

Taking off with a view of the sea will enchant you with a touch of history and the discovery of hidden waterfalls.

Above the emerald river Soča, is the Kuk take-off point, which lies at 1460 meters, and is soft and
grassy to ensure a safe and comfortable take-off. During the flight, we can enjoy the view of the sea and observe the beautiful villages in Venice. The flight also reveals a view of the Kozjak waterfall, a popular natural landmark. We fly over Napoleon’s Bridge, which takes us back in history for a
moment, as Napoleon’s troops marched on it. Those of you who are lucky will also be able to notice the marble trout swimming in the clear river. Your flight ends at the landing in Kobarid.

You can find us in the upper part of the Soča Valley, in the heart of Bovec. Get in touch and we’ll be happy to meet you there.
CONTACT

WHAT DO HAVE TO DO BEFORE I DECIDE TO GO TANDEM PARAGLIDING?
It is recommended that the flight is booked in advance. You can book by phone, e-mail or on the website, or you can visit us at our premises in Bovec. We will first explain the flight procedure in Slovene, English, Italian, Russian, Serbian or Croatian. You will receive information on how paragliding is performed, what is expected of you, what clothes you need and other necessary information. We will arrange transportation to the take-off point, which can be by car or gondola lift if you are coming from Kanin. You can read more about the various take-off points above. Once you have received all the information and we have answered all your questions, you can decide whether or not to fly with us.
WHAT CLOTHES DO I NEED FOR THE FLIGHT? 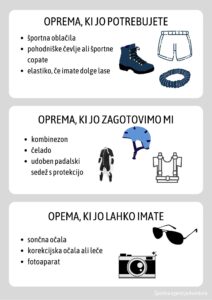 We advise you to wear sportswear. You can wear sneakers, but hiking boots are the most suitable . In the summer you can wear shorts and a T-shirt, as we’ll give you overalls. We also provide you with a comfortable parachute seat with protection and a helmet.

CAN I WEAR GLASSES?

HOW LONG DOES THE EXPERIENCE TAKE?

If you have booked the flight in advance and we have the guide and driver ready for you, then it all takes about two hours. Advance booking is recommended, as we can then follow the weather and adjust the flight. However, if the flight is not booked in advance then we cannot guarantee the  immediate departure – perhaps you can go straight away, perhaps in an hour or two, or perhaps you’ll have to wait for another day. It all depends on the weather, and safety always comes first.

Once in the air, the flight itself takes 20 to 40 minutes, depending – as always – on the weather

CAN ANYONE ENJOY PARAGLIDING?

Yes, but paragliding is still an individual thing, so we’ll talk about what we do first, what to expect. We also explain everything on the way to the take-off point and again before take-off.

The take-off is very calm, as you only take a few steps down the slope and then you’re already in the air. During the flight itself, we make sure you feel good and safe. Sometimes people can feel nauseous, especially if they ate too much for breakfast and didn’t know what to expect, but this is rare.

The landing Itself is very safe. An easier landing is made by the parachute guide landing on his feet and the guest descending on their butt, where the seat is padded with protection. Those who would like to try the right landing can however choose to land on their feet and run a few steps forward until we stop.

ARE THERE ANY RESTRICTIONS ON WHO CAN FLY?

There are no restrictions, but we like to make sure that children want to try flying on their own and are not afraid of it.

Is paragliding organized only in summer?

The season runs all year long. In winter there is a possibility of taking off from ski resort Kanin. At the end of April you can take off on skies and land among the yellow dandelions.

What is included in the price?

Izredno pozitivna izkušnja. Kljub prvotni nervoznosti, sva se oba s fantom že pred spustom počutila varno in sproščeno. Izkušeni vodniki čez celoten polet skrbijo za dobro počutje, in varnost, prav tako na zanimiv način predstavijo razgled, opišejo znamenitosti in popestrijo spust s padalom. Definitivno ponovimo!
Ana
Really good experience ! Feel really safety and confident with the staff. They know what they do and you can feel it directly. Thanks a lot for this first time to all the team !
Nicolas
My wife was a first time jumper, we were understandably nervous - but there was no need for this! The pilot was fantastic, made my wife feel very safe. They took off exactly on time around 1900m, went up to 2100m and took 40min for their full flight before landing in a neat little.
Mowlya & Sagar